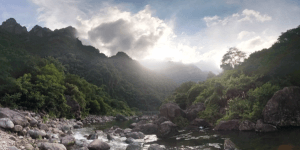 The summer months in Fuzhou can get extremely warm. Temperatures reach 30oC + (86F) regularly and even get closer to 40oC (104F) at times. Most of the time this is just about bearable. All of the York teachers here live in air conditioned apartments, work in air conditioned teachers offices and classrooms but it is nice to take an opportunity to cool off. In Fuzhou there’s no better way to do that than to take a trip to a nearby National Park called 18 Streams.

In a strange coincidence, 18 York teachers made this trip to 18 Streams in late June. The day began in somewhat chaotic fashion with us meeting outside the West Lake branch of York English at 10.00am only to see our bus driver (and bus) driving straight past us. Oops. I suppose we weren’t punctual enough for him. A few hurried phone calls later we were able to arrange alternative transport and off we went.

The journey there was remarkably short. Just a 50 minute coach ride out of the side, across the river and into the mountains that surround Fuzhou. Once we arrived and paid for entry (a paltry 30RMB) it was a humid and sticky walk through the valleys alongside the gentle flow of the river.

About 45 minutes later we arrived at a large pool of water with a small 6ft waterfall at one end.

Within a few moments ever

yone was in the water. The initial shock of “wow that’s cold” quickly changed into “wow that’s refreshing!”. Next to the pool there was also a large outcrop of rocks which made a great diving point. Some teachers who’d been there before showed the rest of us where to dive from and also how to slide safely down the waterfall (which was christened The Washing Machine due to the frothing water on the way down).

We spent a few hours there, hanging around in the water, eating our picnics and enjoying the mixture of warm weather and cool water before walking a bit further upstream, in search of a huge waterfall we’d heard about. For those of us who’d never been there before we were taken back by the scale of it. A contrast flow of water poured from a gap between the rocks 50ft above us, falling into a beautifully clear pool underneath.

Joined by some locals

A few local tourists arrived at this point and found themselves amazed to see so many foreigners in this little-known about tourist spot in Fuzhou! Following our lead they quickly joined us in the pool and while they weren’t swimming, they were wading out into the water and seemed to have fun splashing each other. While they were doing that, some of our teachers tried their hardest to climb the near vertical cliffs from the water, before falling back into the water to the amusement of everyone else.

After that the sun came out so we walked a bit further downstream, hoping to catch a bit of the late afternoon sun (most of us discovered later that evening we’d caught too much and got sunburnt, oops). One last quick dip was all we had time for before a sweltering walk back to the thankfully-air-conditioned bus. All that was left was a short bus ride back to Fuzhou. Not bad for a cheap day trip out of the city!

About the Author: Mike Taylor

I am the HR Manager for York English in Fuzhou, China. Having worked as a teacher and then an Academic Coordinator at York English for 3 years I now head up the recruitment. When I'm not looking for the next generation of budding ESL teachers I like to cycle, watch football and do photography.
Share this page. Choose your platform.