Not long after the start of the new Gregorian year, the Chinese New Year is in hot pursuit. And quite fittingly this year it is the turn of the Horse to do the chasing. You can probably find out for yourself what this will mean for you on many international websites around the world as Chinese New Year slowly grows in popularity. It’s a pretty good fit really. After the treble of Thanksgiving, Christmas and New Years Eve, it can be a bit quiet until Easter (apologies if you’re birthday is in this period but you’re not popular enough to have a worldwide celebration!).

Good questions. Much more than a one off day, it is normally a two week ordeal involving traditional food, a time of giving thanks to relatives and visiting family all over the country. It follows the lunar calendar and incorporates mythology, as well as fireworks – which you don’t want to miss, red envelopes and steeps of tradition.

Where Do You Go? 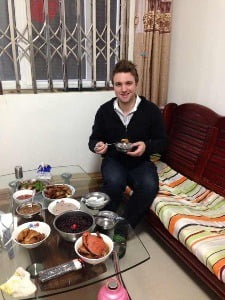 Well during the two weeks most people have off work there are many family meetings, resulting in possibly a billion people straining the public transport to the maximum. Many people go on holiday too. At York School we had a huge school dinner for the one hundred and fifty workers now employed here. Usually during the meals – whether with work or your family – there’s normally far too much to go around. There was a 50-50 lottery giveaway and performances by many of the staff, plus far too much alcohol. For families everyone meets up and has the same amount of food. It’s a great time for catching up on people you haven’t seen for a while or perhaps playing some Mah-jong. On the actual New Years eve it is imperative that you spend it with family and if your family has a barrel full of fireworks or firecrackers then all the better. 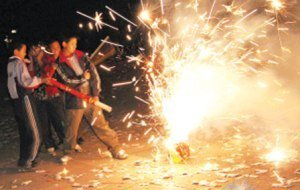 The fireworks are a symbol of scaring away evil spirits and ensuing that you have a fruitful 365 days. In doing so it turns the entire country in to one huge smoky arena as soon as midnight strikes. It’s truly spectacular and far superior to Guy Fawkes night. I recommend that everyone should just go to the roof of their apartment block and watch as it unfolds.

What Are The Alternatives?

If fireworks, food and thousands of people stepping over each other to walk around parks isn’t your idea of fun then the best thing to do for a foreigner is to travel well in advance and only return after it is all finished with.

This year I tried to combine traditional with Western and after visiting my girlfriend’s parents and grandparents we’ll also be going to Hong Kong for a few days to get away. Which, considering they just opened a new fast train to Shenzhen from Fuzhou that only takes five hours, it really is an easy option. It’s now closer than Shanghai and more likely to remind me of dear old Blighty. Aside from this to look forward to, it was another great New Years Eve had in China and I wish everyone a great year of the Horse! Xin Nian Kuai Le!

About the Author: Greg Clark

Greg Clark is an ESL Teacher at York English, Fuzhou.
Share this page. Choose your platform.