7 Chinese Phrases to Know When You Travel

7 Chinese Phrases to Know When You Travel

Let me guess. One huge reason you came to China was to travel, right?

Regardless of where you’re based in China, your day-to-day experiences in that city are extremely valuable. But sometimes it feels good to take a break from living as a local and to be a tourist every once in a while! There are numerous places you can visit during your time in China, both in and out of the country.

Here are some basic terms and vocabulary that will help you make your way during expeditions. These phrases are especially helpful if you plan to travel by yourself. When you have no one to lean on, knowing as much Mandarin as possible is the biggest advantage you can have!

This is probably the most useful phrase you’ll learn related to travel. You will undoubtedly get lost in a huge Chinese city and need someone to point you in the right direction.

“Fēi jī chǎng” is the Mandarin word for “airport.” This term, along with numbers three and four on this list, are crucial to know when you get into a taxi and need to go to one of these places.

If you are using the metro system in a city, you can also ask people “fēi jī chǎng zài nǎlǐ ?” (飞机场 哪里?) This means “Where is the airport?” The airport is usually off one major metro stop, so someone can point to the correct stop on the map for you.

When you’re running late for a pre-booked flight, this word comes in handy!

This is the translation for “train station.” I never think to learn this phrase before I travel to a new place, because I am from Southeast USA, where no one takes trains.

However, trains are fairly common in China. Chances are, you’ll need to use this phrase while you’re over there.

This phrase means “bus station.” Keep in mind, this is not the term for “bus stop.” Bus stops are where you stand when you’re waiting for your daily bus to pick you up for work in the morning. Bus stations are where you go to buy a ticket for an intercity bus ride, as well as where the bus will pick you up.

This is the term for “taxi.” Taxis are effective ways to get around China, and there are lines of taxis in various parts of the city. But if you’re in a foreign city, you might not know where those lines of taxis are located. Now you know how to ask where the taxis are! 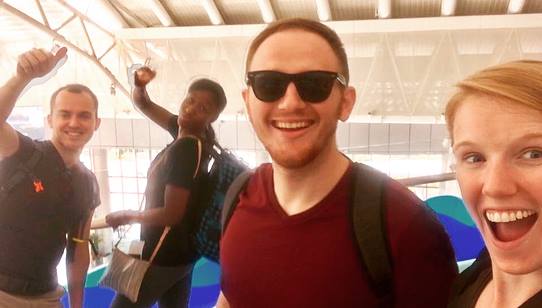 This translates to “I would like a ticket to … “ I’ve needed this phrase before, and I was not prepared. The woman selling bus tickets looked at me like I was an idiot.

You can easily buy a plane ticket online through CTrip. However, the process is much more difficult to figure out online for trains and buses. So this phrase is very helpful.

When I finally communicated with the aforementioned bus ticket saleswoman that I needed a ticket to Yangshuo, she asked me to pay without telling me how much it cost. This type of interaction happened to me several times in China. This phrase will keep you from getting ripped off, or even just from being surprised.

About the Author: Laura Grace Tarpley

Laura Grace Tarpley is a freelance writer and English teacher in Shenzhen, China. She enjoys tinkering with crossword puzzles, reading Bill Bryson books, and taking naps on her huge couch. Follow her travels on her Instagram and Twitter. Or you can check out her blog, Let’s Go, Tarpley!
Share this page. Choose your platform.